This sentence will need to be changed, but should encourage the user to click the button below to go to the form.

The Global Renewable Fuels Alliance is an international federation representing over 90 percent of the world’s renewable fuels production from 45 different countries.

Through the development of new technology and best practices, our members are committed to producing renewable fuels with the smallest possible ecological footprint.

The GRFA is committed to promoting the expanded use of renewable fuels throughout the world through the advocacy of sound public policy and responsible research.

The UN FAO Food Price Index averaged 155.7 points in August, down 5.2% from July, representing the steepest monthly drop since December 2008 with virtually all major food commodities registering marked dips. This drop coincides with a fall in crude oil prices in July of 19%, closing at $48.25USD per barrel on July 31.

The Global Renewable Fuels Alliance (GRFA) has for several years argued that the price of oil and energy inputs are the single most influential drivers of food and commodity prices. A number of international institutions including the World Bank, International Energy Agency (IEA) and United Nations Food and Agriculture Organization (UN FAO) have also recognised the strong relationship between oil prices and food prices.

A 2013 World Bank publication, Long-Term Drivers of Food Prices, concluded that almost two thirds of food price increases are caused by rising oil prices. The report states that between 1997-2012 the price of crude oil caused maize and wheat prices to increase by 52 percent and 64 percent, respectively. The report also found that biofuels had a negligible impact on food prices during this period.

The undeniable relationship between oil price and food price is outlined in the chart below. The recent collapse of global crude oil prices has been followed by the collapse in the global food price index showing how reliant food prices are on the price of oil. 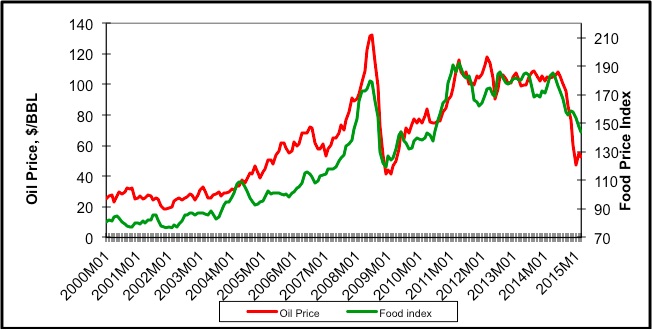 In a recent publication, the UN FAO conclude that increased biofuels demand has helped the agriculture sector by increasing agricultural productivity and output which has “ensured that the global supply of crops available for non-biofuel uses has continued to grow over the long term.”

In a speech this past January at the Global Forum for Food and agriculture the UN FAO Director-General Jose Graziano da Silva recognized biofuels as a key part of the global agriculture complex with social, agricultural and environmental benefits and outlined the potential for agriculture to accommodate mutually supportive food and biofuel production.

There are currently no comments on this article.

Subscribe to the Global Renewable Fuels Alliance updates today and keep up with industry news effortlessly! »